By Lanford Beard   Entertainment Weekly May 2012

You may know Wendi McLendon-Covey as David Spade’s man-eating wife on Rules of Engagement, the bawdy housewife from 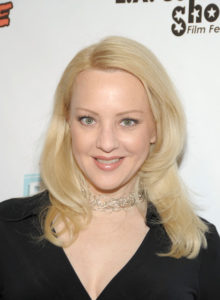 Bridesmaids, or busty Deputy Clementine Johnson on Reno 911! Now the actress, 42, is taking perverse pleasure in playing the “wet blanket” to Jennifer Lopez in May 18’s What to Expect When You’re Expecting.

• A CAREER IS BORN
In 1997 the SoCal native was working in corporate sales at a Ramada near Disneyland (“It was so depressing. I just looked forward to my 2 o’clock Twix”) when she decided to take classes with famed L.A. improv troupe the Groundlings. “I started at the lowest level, which is not even for actors. It’s, like, for people on the weekends who just want to do something crazy.” Once there, she met future Bridesmaids stars Kristen Wiig, Maya Rudolph, and Melissa McCarthy.

• FROM THE GROUNDLINGS UP
When McLendon-Covey landed an audition for Comedy Central’s Reno 911!, she knew a hardcore narcissist character she’d created could work for the role of sexy Deputy Clementine Johnson, only… “I went in and I was not feeling sexy,” she says. “Then I thought, ‘Well, what if she just thinks she’s sexy? Isn’t that funnier?'” Yes: McLendon-Covey got the gig and stayed on the series for five seasons. In 2007 Maxim called Clem one of the “Top 10 TV Nymphos.” “Such pride!” the actress says, laughing. “I’ve been able to parlay that into so many other things.” Not really. “I didn’t get a trophy, no certificate, no 10 percent off at Orange Julius. Nothing!”


• LADIES WHO LUNCH
Though Bridesmaids ranks as “one of the best professional experiences ever,” she found herself cringing at this year’s AFI luncheon. “It was a big deal, very chichi, and they were showing all these clips from the movies they were honoring — War Horse, The Tree of Life. Our clip comes up. What do you think it is? Me vomiting and Melissa s—ting for a full minute. I thought, ‘Didn’t we do some other things?’ It was pretty embarrassing.”

• GREAT EXPECTATIONS
In What to Expect, McLendon-Covey plays an atypically serious part: the boss and best friend of Jennifer Lopez’s starving-artist mother-to-be. “It was fun for me to be the wet blanket,” she says. Even more fun: shooting a karaoke scene in which the cast sends up the Human League. “We were drunkenly singing ‘Don’t You Want a Baby.’ I loved that.”

• IT’S A TOUGH JOB…
Fans recognize McLendon-Covey these days as Rules of Engagement’s lusty Liz, and you can also catch her as the perfect hostess in four new Old Navy ads. Next she’ll shoot the indie Claire’s Cambodia, butting heads with Mamie Gummer. “I like to play a variety of characters, not just the drunk, boozy slut,” she says. Then again, she’s happy to do it all. “At the Groundlings, it was about who could be the ugliest, do the most embarrassing thing on stage, and walk out with their head held high.”

Previous: What It’s Really Like to Work With Jennifer Lopez

Next: Breaking through the veil of the boys’ club