Jeff Garlin and Wendi McLendon-Covey of The Goldbergs aren’t just funny together — they resonate as only well-matched comedy couples can. 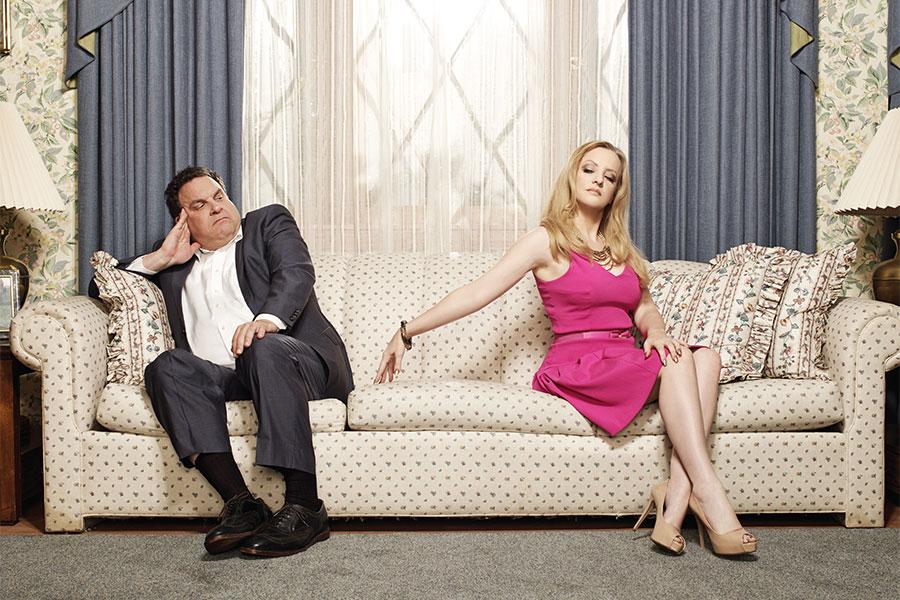 Jeff Garlin and Wendi McLendon-Covey shtick together like glue on ABC’s freshman hit The Goldbergs, the retro comedy about a kooky family in 1980s Pennsylvania.

As distracted dad Murray Goldberg, Garlin grumps around the house in his skivvies — to his kids’ dismay.

Garlin and McLendon-Covey aren’t just funny together — they resonate as only well-matched comedy couples can.

He’s an old-school fast-talker who developed improv skills at his hometown Chicago’s Second City. Later, he not only played Jeff Greene, Larry David’s loyal manager and BFF on HBO’s Curb Your Enthusiasm, he helped create that iconic show-biz satire (which is on an extended hiatus).

Garlin still does stand-up, and now he also has a podcast, By the Way, which lets him host guests such as Sarah Silverman and Judd Apatow.

Next up: he plays Keira Knightley’s dad in Lynn Shelton’s slacker comedy, Laggies. And he’s working on a follow-up to I Want Someone to Eat Cheese With, the winsome 2006 indie hit he wrote, directed and headlined.

Anyone who saw McLendon-Covey goof in the comedy smash Bridesmaids — or as ultrasaucy Deputy Clementine Johnson on Comedy Central’s Cops spoof, Reno 911 — knows she can just wink and get a laugh.

Tell her she’s gorgeous, and the Bellflower, California, native demurs, “Today, I look like an old witch!”

Like Garlin, she graduated from improv (at L.A.’s Groundlings) to costarring roles in movies; look for her in the Tyler Perry comedy The Single Moms Club and this summer’s Adam Sandler–Drew Barrymore romance, Blended.

These two stars have plenty to bond over between takes on The Goldbergs (which is related in name only to the long-ago radio and TV comedy about a family of Jewish immigrants).

For starters, they both like ‘80s radio mainstays The Talking Heads: “Jeff was playing ‘This Must Be the Place,’’’ says McLendon-Covey, “And I was like, ‘How did you know that’s my favorite song ever?’”

More important, both had dads who instilled a strong work ethic: hers worked in sales for Coca-Cola; his toiled in plumbing supplies. Their moms made sure they got some religion: she was raised Baptist and attended a private Christian elementary school; he went to Hebrew school “once or twice a week” and was bar mitzvahed.

They’ve both been married for more than twenty years: her husband, Greg, is a database designer, while Marla, Garlin’s wife and the mother of their two teenage boys, is a casting director.

Had you two met pre-Goldbergs?

McLendon-Covey: I’d auditioned for Curb a couple of times and Jeff was always really complimentary.

Then I saw him at a New Year’s party in 2011, and he said, “Hey, I’m doing a pilot over at ABC and I want you to play my wife.” But it didn’t work out. The following year [The Goldbergs] came up, and it was just perfection.

Garlin: That other show didn’t even go to pilot. When I got the script for this show, and they told me that Wendi was playing the wife — she was the first person cast — I was like, “I have to do this!”

This isn’t The Goldbergs of early radio and TV fame….

Garlin: I never saw it. But I know all about the history of television. So I love that we have embraced that this family is Jewish. Any time we embrace something like that, it’s fantastic.

But there were a lot of discussions about the title. I said, “Let’s not stick our toes in the pool — let’s dive in the pool. Let’s be The Goldbergs!”

The ironic thing is, only two people on the show are Jewish: George Segal [who plays maternal grandfather Albert “Pops” Solomon] and myself. None of the kids are Jewish, Wendi’s not Jewish.

Garlin: In reality, Wendi has no children, and she loves her cats! As for me, I’m nothing like Murray. I’m a very vulnerable person. I tell my kids constantly that I love ‘em. I kiss ‘em, I hug ‘em, I wanna be with them, I can’t get enough of them.

I guess where I’m the same as Murray is when I get home, the first thing I do is take off my pants. I even walk around the set in my underwear. I’m kind of like a PG-13 version of Lena Dunham.

McLendon-Covey: If I did have kids, I would probably be overprotective like Beverly. I would be one of those weird parents hiding in the bushes, staring into my kid’s classroom. And if I saw another kid look at my child in a way that I found disrespectful, it would not be pretty.

It’s all motivated by love. She loves them so much that she just can’t let go. And she needs to be needed, and I understand that.

Wendi, have you ever had big hair?

McLendon-Covey: Of course! In my senior year [in high school], my best friend at the time had big, gorgeous princess hair, and I was on a quest to get my hair as big as hers. Going into my early twenties, my hair was gigantic. And see-through. If I stood against the sun, I looked like a dandelion.

Talk about some on-set wackiness….

McLendon-Covey: I don’t know why he likes to do this, but Jeff will say this to just about anybody: “Hi, little Japanese girl!” [Laughs] And he sings songs constantly.

Garlin: You know, silly songs about nothing. And then I tell her it’s from my new Broadway show. [Laughs] We just laugh all day, and we have great conversations.

And I have just as much fun with her when the cameras are rolling. I put her up in the league of, like, a Catherine O’Hara.

Speaking of Second City alums, you both have improv backgrounds. Do you ever do sketches on the set?

McLendon-Covey: Ha! Well, we do have very similar senses of humor. If Jeff starts launching into one of his improv explorations, I can follow him pretty well.

He’ll launch into something [during filming] and I’ll be laugh-crying my makeup off and we’ll have to start again. It makes for a very fun work environment.

Garlin: We have that background, but that’s more on camera. Off camera, I’m really taken with what a no-nonsense person Wendi is. Yet I do a lot of nonsense with her.

She’s just a really thoughtful, excellent person to be around.

Wendi, what else do you like about working with Jeff?

McLendon-Covey: He is one of the most genuinely loving people you are ever gonna meet.

As acerbic as his wit can be sometimes, he will come up and grab you by the hand — and I’ve seen him do this with crew members, with other cast — and whisper in your ear, “I am so lucky to be working with you.” He is just such a big, loving teddy bear.

Jeff, what’s surprising about Wendi? Like, does she play the harpsichord?

Garlin: Well, she’s always stretching. She’s always using different equipment to stay limber in between shots. Here’s what I’m going to tell you: she is a ridiculously sexy woman!

How “Hollywood” are you two?

McLendon-Covey: I live down in Long Beach and I like it. My parents are two miles away and no one around me is in the business, so I don’t have to hear about it all the time. When I’m done, I’m done.

Garlin: I love living in Los Angeles. I still have a place in Chicago, but I’m living in L.A. for the rest of my life. I love the air — believe it or not.

I think the comedy audiences are the best in L.A. The next movie that I’m writing takes place in downtown Los Angeles.

How do you stay grounded?

Garlin: My dad, he really taught me the lesson of don’t believe the hype or the bullshit.

McLendon-Covey: Here’s how I deal with any success: shut up and keep working, ‘cause it could end at any time.

At the beginning of my career, I would take things very personally. I don’t anymore, because in hindsight, I dodged a lot of bullets. It all works out.

Garlin: Just watching George Segal, a man who’s close to eighty, and his ethic is pretty f—king remarkable. Who wouldn’t want George Segal as a mentor, as a pal? And that’s what I have.

Between him and Wendi, I have this dream job.