OK!: What’s going on in this week’s episode?

Wendi McLendon-Covey: Beverly is snooping in Erica’s bedroom and reads her diary. And Bev is so savvy she knows there’s a regular diary and a decoy diary. Erica gets wind of this and starts making up stories in the real diary, and Bev is totally distraught. Then on Adam’s side, Adam has a little girlfriend, a girl who’s a friend. It’s that whole thing of, ‘Wait, I don’t want to feel this way about you. Don’t make me! Are we supposed to want to make out and stuff?!’ You know, that tween angst.

OK!: How would you characterize Beverly’s relationship with her kids?

WMC: Beverly loves her children with such an intensity that she will risk her reputation and her dignity to keep them safe and to keep them from ever doing anything remotely uncomfortable. By doing that, she pushes them away. [laughs]

OK!: What were you like as a teenager, and did you drive your parents crazy?

WMC: I managed to drive them crazy, but I never did anything that bad! My parents were so overprotective that every time I questioned anything, they thought, Well, someone’s got an attitude problem! Seriously, I had a 9 o’clock curfew, I was not allowed to have any style whatsoever. There I was in my teddy-bear sweatshirt. I rarely did anything wrong. Never ditched school, never went to keg parties, never did any of that. Of course now they say, ‘Yeah, you were a good kid. We’re sorry.’

OK!: But then you became a comedian, so—

WMC: And now they’ve gotta live through it, because I tell all those stories! I’m doing that on The Goldbergs, too. I’ve given them plenty of fodder for stories.

OK!: What’s your favorite part of playing Beverly, and I hope it has to do with the clothes?

WMC: [laughs] Well, okay, let’s just address the clothes. Every day, I go into my trailer and there’s some fresh hell waiting for me. And I just have to suck it up and say, ‘Okay, that’s what the character would wear!’ Some of the clothes are from the real Beverly Goldberg’s closet. She saved everything. So a lot of my glorious sweaters are from Beverly. But what I love about her is that if I had kids, I’d probably be the same way. I would be insane. I would be so protective of my little babies, and I’d have mom goggles to infinity. Everything they did, I would be bragging about it until I had no friends. I would absolutely be like Bev. 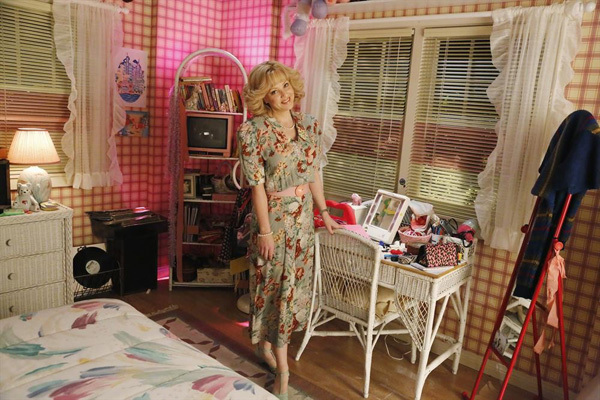 OK!: Since you are a goddess of improv, how much, if any, of the show is improved?

WMC: We don’t improv a lot on the show, because the scripts are pretty good and they don’t need it. But when we have scenes that have to be filmed from Adam’s perspective, like when he’s filming us with his video camera and we’re not supposed to notice, I’ll kind of do some improv then. And a lot of times they keep it! If the material wasn’t there or needed punching up, we’d do it. But look, we have some of the best writers in comedy today, so we kinda don’t need to.

OK!: What is making you laugh these days?

WMC: Let’s see. I love The Kroll Show. That is so stupidly funny I can’t handle it. I love Chris Lilley and Ja’mie on HBO. And that show Niecy Nash is on, Getting On. So cringe-worthy, and I love it!

OK!: With Valentine’s Day coming up, what can people learn from Murray and Beverly? If anything?

WMC: [laughs] I think what you’re going to learn about love from Bev and Murray is love is about showing up. Love means quietly being there and just taking it. [laughs] Doing things you don’t want to do, and not making a fuss about it. That’s love, just being there. They’re not terribly romantic.

OK!: In that vein, who are your favorite TV or movie couple of all time, and how have they inspired you about love?

WMC: Gomez and Morticia Adams, because they are just so crazy passionate. They wear the goggles for each other. Everything Gomez does, Morticia says, ‘Ohh, magnificent!’ And everything she does, whether it’s her horrible howling with the strange Japanese mandolin she plays, it’s, ‘Ohhh, Tish!’ He just gets so turned on. So that’s how we try to live at this house. Try to Gomez and Morticia it up.

OK!: What movie do you watch every time it’s on TV?

WMC: When Harry Met Sally or Pretty Woman, because they just lift my spirits and I can’t articulate why that is. Those two movies, to me, are everything that’s great about the movies.